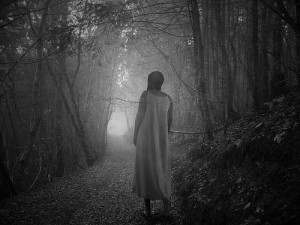 The small, one bedroom town home was silent in the morning calm. The Sun’s light streamed in through the crack between the curtains and chased the shadows out of the bedroom. Something clanked in the small, dark home.

Carrie Post rubbed at her eyes and slid her feet down towards the bottom of the bed with that sinking feeling in the pit of her stomach that she had grown far to used to over the past few days. This house didn’t feel right to her. Not at all.

She sat upright in bed and swept her long, brown hair from her face and looked around the room – searching for signs like she had seen before. The signs had started out small, but were growing larger every night. Something was very wrong.

She pushed the covers off her body and slid her feet over the edge of the bed. She narrowed her eyes and scanned the bedroom carefully, but saw nothing different. She pushed off the mattress and moved into the living room.

She gasped when she saw the empty beer bottle on the computer table. Tears filled her eyes as she slowly dropped to the cold, wood floor and broke down in sharp sobs. She didn’t keep beer in her home. She didn’t even drink anymore. Not since all this started. She reached out and grabbed the phone and her hand froze before she dropped it back into it’s cradle.

Someone had been in her house again and it scared her to death. The problem was, no one believed her.

Friends told her to do everything from calling the police and filing a report to getting an alarm to getting a dog, but nothing made the sick feeling in her stomach ease. Someone had been in her house smoking one evening, sending emails from her account the next, and now drinking not one, but a series of beers in her home while she slept like a baby. What was next? This person obviously had free access to her locked home. What could they do to her?

People she spoke to about the recent events looked to her with sad eyes and asked how an intruder could enter her home when it was locked and chained and the locks had been changed. They looked at her as if she were going mad or seeking attention.

It only got worse.

The next night, the prowler entered again. He fixed a meal and evidently watched a few movies, leaving the stack by the TV for her to find. Carrie thought for a moment that this criminal had slipped something into her water – knocking her out somehow. There was no way she could have slept through all this.

When she managed to make it out of the house to head for work, she found her car moved as well - parked on the street and not in her driveway where she had left it when she returned from work the previous night. She wanted to be sick. She hugged herself tightly and pressed herself against her garage. Her eyes scanned her neighborhood and it’s once friendly presence now seemed to hide watchers and danger. She slipped back into her house and locked the door, deciding to take a sick day. She needed more rest.

She thought that maybe she was drugged. The feeling that washed over her was heavy and deep. Her eyelids fluttered as she stumbled towards the bed. She had to lie down. Sleep this all away. She couldn’t fight it even though the thought of someone still lurking in her home filled her thoughts as she drifted away into the shadows of sleep.

When her eyes opened again, the room was completely dark. Carrie had no idea how long she had been asleep. She rose from the bed and fumbled for the clock. It read five-thirty AM. She had slept for almost 24 hours. She coughed and stumbled from the bed running her hand over her head.

Her hair. It was wrong. Short and slightly damp.

She shrieked and ran to the bathroom. Her hand slammed into the switch and light filled the restroom and illuminated her face in the mirror. Another scream caught in her throat as her eyes went wide and took in the new hairstyle – cropped short and dyed black in a Euro style. Her hair had but cut, styled, and dyed black…as she slept?

Blackness swept in around her and she fell to the bathroom’s tile flooring like a stone.

Clair’s eyes fluttered open and she felt around herself in a panic. She was covered with something. Some sort of light sheet.

Striking out with her hand, she shoved it up and off her head and bolted upright again.

Daylight streamed in and warmed her. Cool, fresh air came in through the open window before her and the smell of bacon and coffee filled her nostrils. Her heart raced. Fear flooded over her.

She took in her surroundings – all unfamiliar and strange to her. This wasn’t her house. Not her bed. She started to cry, choking back sobs. She stopped suddenly when she heard footsteps thumping over carpet towards her.

A man’s voice called out softly. “Carrie? You ok?”

Blackness rushed in at Carrie. She didn’t even feel her head hit the pillow.

Blackness engulfed her for a long, long time. She felt like she was caught in some limbo. A void. All half awake and drifting on a sea of dark.

Something filled her mind with sadness as a sudden dawning washed over her. This time, when her eyes opened, she wasn’t scared or confused. She believed she understood it all now and the knowledge filled her with melancholy.

She turned her head and stared at the sleeping man at her side and the corners of her mouth turned down as tears filled her eyes yet again. Yes, she understood it all now.

Her head rolled to the right and scanned the framed photos on the shelf by the bedroom’s oak door.

There was a photo of Carrie skiing, something which she had never learned to do.

A photo of Carrie holding a smiling man’s hand and dancing. Someone she didn’t know. She looked so happy and free. Even though the picture clearly was Carrie, she stared at the couple within the frame like they were both strangers.

The last photo made Carrie’s breath catch in her throat. Carrie was cradling a small child in her arms and looking at it with love. It looked just like her. It was so small and soft and fragile.

She pitied herself. How could this to happen? Her life was no longer her own. She didn’t even know herself anymore. She felt herself slipping away again, but didn’t fight it.

Carrie Post rolled her head on her pillow and stared at the ceiling. She drew in a breath and blinked.

“So tired…,” she whispered before closing her eyes one…last…time.
Posted by malcoJOJO at 5:47 PM